“ The coloured overlay made an instant difference. All Neil's dyslexia symptoms are gone. ”

Some individuals with apparently normal eyesight, experience discomfort when viewing a page of print. Some report that the words appear to move, wobble or flicker while others say that the page appears too bright or the words are too close together. This condition is sometimes known as Meares-Irlen syndrome. Those affected by the condition may skip words or lines when reading. Others report eyestrain or headaches after reading.

Meares-Irlen or visual stress can cause the following symptoms

These symptoms are sometimes relieved by placing a coloured overlay over the print or by wearing spectacles with tinted lenses. The colour required to achieve optimum relief varies between individuals and may change over time. In order to measure the precise tint required by an individual, an assessment is needed.

Although coloured overlays and spectacles help many clients who suffer from visual stress, the methods of testing have, until now, not been able to identify reading problems caused by muscle imbalances which affect a far greater proportion of the population.  Coloured overlay testing, even when computerised, is very subjective and relies heavily on the person’s responses and opinion- something which can be very variable depending on the person. Such tests can also be influenced by the Optometrist themselves. Testing reading ability especially in the very young, old or those who simply struggle to read has therefore always presented challenges. Thankfully a new piece of technology has revolutionised the way we can detect reading difficulties and taken the subjective element out of measurement.

The Clinical Eye Tracker uses tiny cameras mounted on a computer which detects and follow the position of the eyes to within less than 1 degree. While you sit and look at the screen which shows various visual stimuli, the cameras monitor your eye positions and tracking movements 60 times per second. (The cameras monitor your eyes from a computer screen, nothing touches your eye.)
The clever software then analyses the effect this has on your reading ability and allows us to help correct any problems.

Because the Eye tracker is making physical measurements of the eye with no subjective opinion we are able to quantify the degree of the problem, measure the effect of any treatment (spectacles, coloured lenses, overlays or exercises) and monitor progress even in the youngest clients.

If we identify an eye-tracking issue we then measure the effectivity of spectacles and coloured lenses on eye stability, reading speed and comfort. 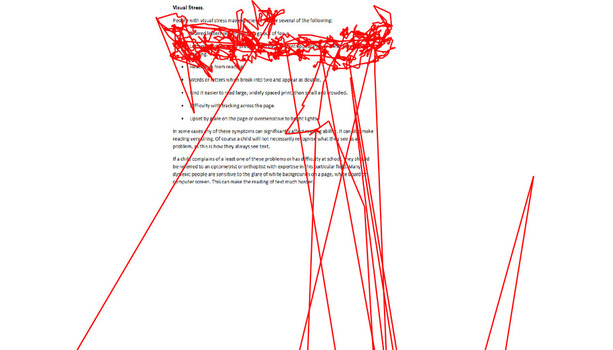 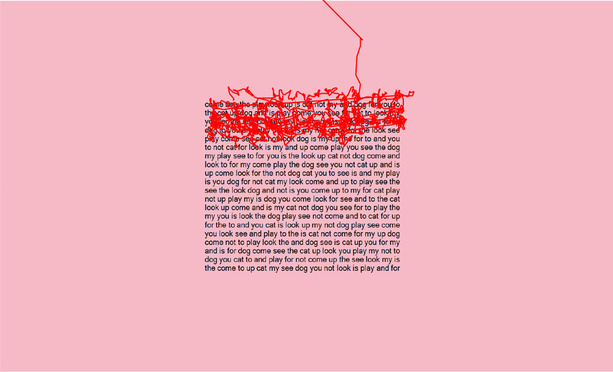 The first image above shows eye-tracking measured in an 8 year old before any intervention and the second image shows the improvement with a pink overlay. As you can see the overlay considerably reduces the eye wandering and jumping.

Below the images show the same child's eye saccades (movements) moving from letter to letter and then back to the start of the next line of writing. The second image which uses the overlay show a much smoother transition between letter and line than without any overlay. This represented an increase in reading speed of 600%.

The eye-tracking assessment which includes measuring of reading speed, eye tracking function and effectivity of coloured lenses on these outcomes takes 30-40 minutes. The cost of the appointment is £195.

It is essential that an up to date eye examination has been performed prior to the eye-tracking assessment. An eye examination can help to identify any focussing issues, binocular vision problems or health issues that may also be contributing to any reading difficulties. Please ensure any current spectacles are bought to the appointment.

Treatment of reading difficulties with coloured overlays and precision tints 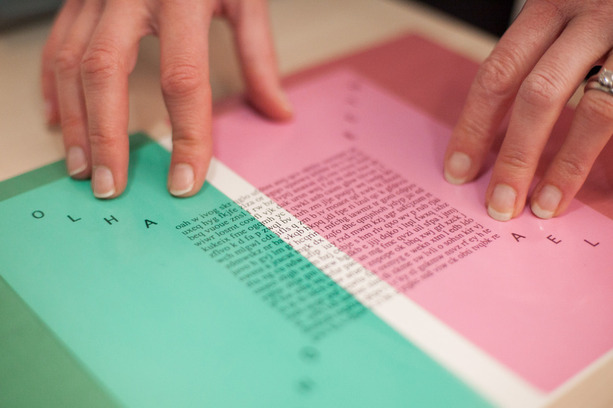 For some people, the contrast between black letters and white paper causes overstimulation in part of their brain which causes reading to be difficult. By finding the perfect tint to help alleviate these symptoms reading can often be greatly improved.

What if the assessment shows my eye tracking and reading needs to be helped?

If the assessment shows a coloured overlay to improve your reading and eye-tracking, you will be able to take an overlay to use at school, work or home. The improvement to reading is often evident from day one (read Isaac's story below) but can also continue to improve further over time. After 3 months of use, if the overlay has been helpful, a further assessment will be conducted to measure the tint required for spectacle lenses (the overlay and spectacle colour differs). Having tinted lenses means you can use the tint for writing, board work and TV as well as reading.

If the assessment indicates the need for spectacles or eye exercises these can be prescribed immediately to start giving you the help you need.

Isaac is a bright, lively 7-year-old who had struggled with reading ever since starting at school. His mum and school had tried everything to help improve his reading. He was prescribed spectacles by another optician but didn’t like wearing them and found no improvement in his reading. He has had one to one help with reading at school but was making little progression when one of his teachers suggested that he have a coloured overlay test to see if it would help.

Isaac’s mum was keen to try anything that may help, so bought him in for an assessment. On examining Isaac it was apparent that reading presented many challenges. He felt the page was bright, glaring and words appeared too close together. His reading ability was at the lowest range expected for his age. Reading often left Isaac tired and frustrated and concentration was extremely difficult. When testing Isaac for coloured overlays it was immediately apparent that the overlays made the print more bearable to look at. He experienced less glare and the words appeared ‘more comfortable’. His speed of reading immediately improved with the overlay so we gave him one to try out at school.

3 weeks later Isaac returned. Since starting using his overlay, in just 3 weeks Isaac had improved 2 reading levels at school and had suddenly started enjoying reading. His reading assistant was so astounded she came to find his mum in the playground to tell her the good news. On his second visit to the practice he actually asked his mum to bring books with him to read whilst he was waiting. For a child who previously ‘hated’ reading this is a massive turnaround.

Here’s what Isaac’s very happy mum had to say about it. 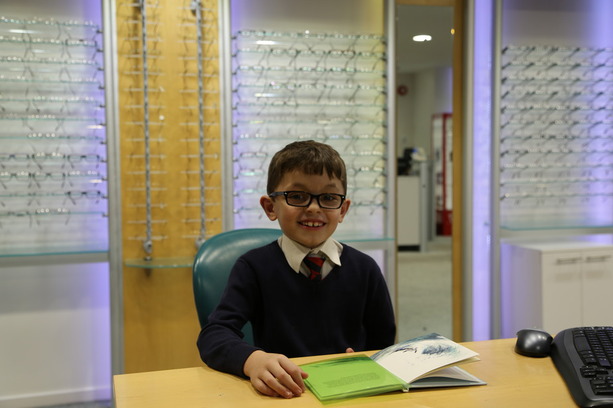 ‘Isaac was referred to the opticians for an Irlen’s coloured overlay test by his school. Kathryn checked him and gave him a leaf-green overlay to use at school. Within a few weeks of using the overlay Isaac’s reading had improved amazingly along with his confidence. Isaac is now reading books in 5 minutes that only 3 weeks ago took him 20minutes and usually ended in tears of frustration. He has already improved 2 levels in reading books. 3 weeks ago he couldn’t read the word ‘but’, he now reads words like ‘Lamborghini!’ He loves his overlay so much that he was really upset when the school cut it to a smaller more usable size for him. He never reads without it. Thank you Kathryn for your patience.’

Neil is a seven and a half year old lovable boy and twin. Since starting school he has struggled with reading and writing, falling behind not only his twin brother but his peers also. Despite repeated concerns raised with the school only to be told ‘it’s his age , he will grow out of it’ and ‘he’s a boy, boys develop slower than girls’ I knew something wasn’t quite right. Opening the reading books or comparing writing with his twin brother only reinforced the differences between them. Failure to meet the Year 2 School Attainment Test (SATs) national target resulted in Neil being independently assessed by a special educational needs co-ordinator (SENco) and an independent Dyslexia screen which showed ‘High probability’ of dyslexia. I had almost resigned myself to the fact that Neil was Dyslexic as he showed the common traits of: lack of concentration; muddling letters such as ‘p’ and ‘q’ and ‘b’ and ‘d’; missing words out of a sentence; skipping lines in text; and a general apathy towards learning.

Within 24 hours the teacher had made the whiteboard blue (Neil’s colour) and he could see what was on the board (not just a jumble of patterns). The colour overlay make an instant difference in Neil’s reading and I invested in coloured blank and lined paper for his writing and worksheets. Two months on, all Neil’s dyslexic symptoms are gone, he has reached the national reading target; in fact,  Neil is overall a different child, more confident now he can participate in learning and is like a sponge soaking it all up. We have invested in the glasses with colour tinting in order to make Neil’s world a better place and help him with television, the computer and the world in general clearer.

It is the best investment we ever made and I now have an amazing child made even more amazing and much happier. Buchannan Optometrists are experienced at testing and helping children like Neil and they have been more than great through supporting both Neil and I through this difficult time. -  Caroline, Neil's mum