The most Awarded Optician in Kent

The UK Optician Awards recognise the best in the UK Optical industry. Voted for by a panel of industry experts, the top 5 in the UK are shortlisted, and the overall winner is announced at a prestigious ceremony in April each year. There are over 14,000 Optometrists in the UK, and the awards ceremonies are attended by over 600 of the elite in UK Optometry. To even make the top 5 is our equivalent of an Oscar nomination! We are the only practice in the UK to consistently make the top 5 since 2008. So to have won and been confirmed as the best in the UK for four years is a tremendous achievement that we are very proud of.

AOP practice of the Year 2019 Runners up

Unlike our other awards, which have been voted for by industry professionals, this award was voted for by the public, so we were thrilled that our small independent practice came second in the UK.

Optometrist of the Year 2017-2018 WINNER. Alisdair Buchanan voted Best Optometrist in the UK.

There are over 14,000 Optometrists registered in the UK, and Alisdair has just been voted the best at this year's Optician Awards. Having won numerous practice awards before it was Alisdair's cutting-edge approach to detecting eye diseases and treating dry eye won the judges' attention to vote him as the Optometrist of the year. Alisdair is the first optometrist in the UK to introduce Triggerfish Glaucoma monitoring and one of the only practitioners trained in E-Eye dry eye treatment. The advanced technology he has introduced to the practice to enable the highest levels of eye examination and early eye disease detection was commended by the judges, but they particularly noted the lengths he goes to ensure that he and his team care for every client to an exceptional standard. 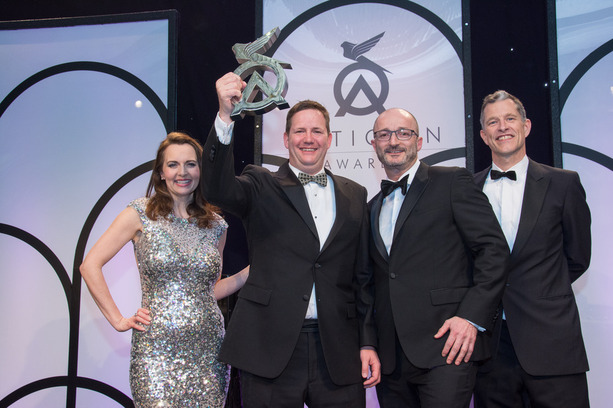 Independent Optometrists of the Year 2016 WINNER Healthcare and Pharmaceutical Awards 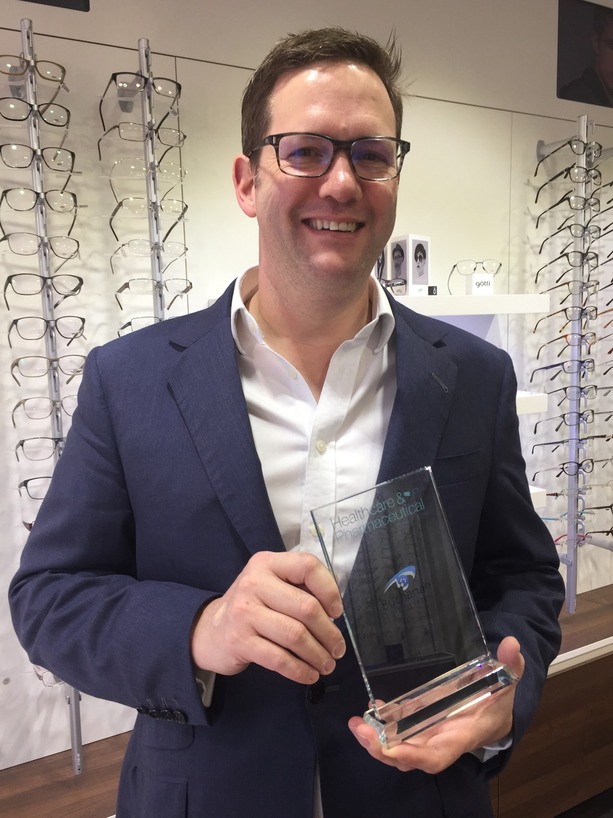 We are thrilled to have been awarded another prestigious award for cementing our reputation as the best UK Independent Optometrists. The new trophy takes pride in place alongside our other recent awards.

Buchanan Optometrists have won the incredible accolade of Independent Practice of the Year. The competition was tough with opticians from all over the UK. The lovely trophy has been added to the practice's other two winning awards. Alisdair, Sean and Gill attended the prestigious ceremony in Birmingham to receive the award from comedian Ed Byrne.

Another year of hard work and innovation (and Alisdair’s lucky Buchanan tartan bow tie) helped us win our third award in 4 years. We have previously won awards for our Technology (2013) and Premium Lenses (2012), but the Independent Practice Award is the most prestigious and the one we have been aiming for since first being shortlisted in the top 5 practices in the UK each year since 2008.

We are thrilled to have won the most significant award in our industry, and to be voted the number one practice in the UK is something we are incredibly proud of. This year the judges were particularly impressed with and commented on our customer care, superior level of eye examinations and equipment, our work with dry eyes, glaucoma, personalised varifocals and our contribution to the community.

We couldn’t offer these unique services without the support of all our loyal clients and excellent staff, so we would like to say a big thank you to you all. It is the first time an optician from Kent has won this award. So now you can proudly tell all your friends that you have been to the most awarded optician in Kent and that the people who look after your eyes are officially the best in the UK!

Buchanan Optometrists were finalists for three awards in the  National Optician Awards 2016, coming runner-up in 3 categories; Independent practice of the year, Family Optician of the year and Technology Practice of the Year. Once again, placing us in the top 5 practices in the UK.

Winning the Technology Practice of the year award confirms that we are not only one of the best-equipped practices in the UK but also acknowledges the boundaries we are pushing. In 2013 alone, we invested over £100,000 in the latest equipment to allow the earliest possible detection of eye diseases, including glaucoma and macular degeneration. The new equipment allows our optometrists to use their extensive experience to improve further your advanced eye care. The judges were also particularly impressed by our other advanced technological achievements. In conjunction with our software suppliers, Alisdair has used his vast dispensing experience and technical knowledge to help develop the country's first computerised dispensing ordering system of its kind. Soon to be rolled out in the UK, the system is set to revolutionise spectacle lens dispensing.  We are also the first Optometry practice in the UK to pioneer a new contact lens to detect glaucoma pressure changes.

On winning the Award, Alisdair Buchanan said ‘We pride ourselves in offering the most advanced eye examinations. And have continued to invest heavily in technology and further training to improve the early detection of eye conditions. Over the years, we have saved hundreds of people’s eyesight and several lives. Much of the equipment we have invested in is superior to that of leading hospitals. To be recognised as Technology Practice of the year is a wonderful accolade and confirms our position as one of the best Opticians in the UK.’

This photograph shows Alisdair, and Kathryn Buchanan being presented their award by Comedian Hugh Dennis from BBC’s OutNumbered and Mock the week. 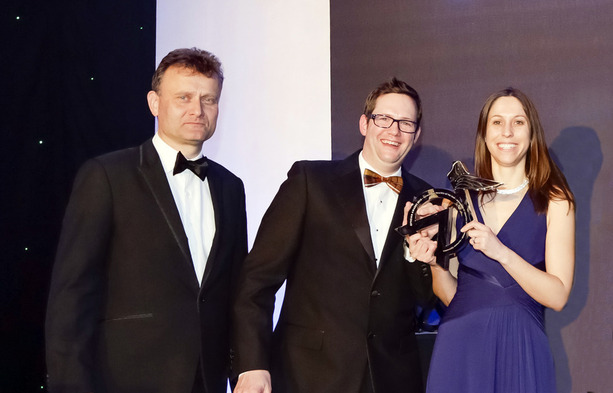 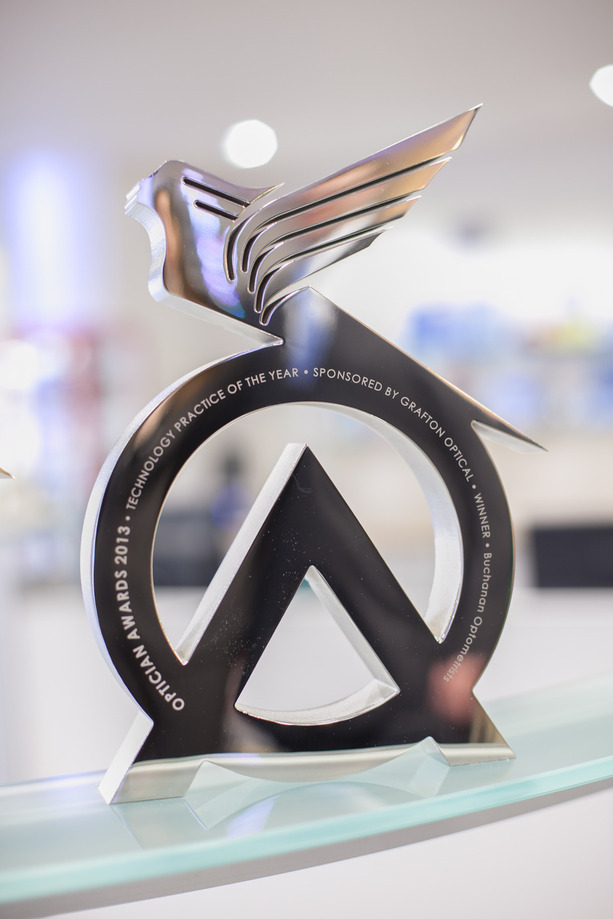 Hugh took a shine to Buchanan Optometrists during the presentation. With most nominees stemming from large cities such as London and Manchester, he got right behind the opticians from Snodland. Impressed that, despite coming from a place he had never heard of, we had been nominated for more awards than any other UK Optometry practice, each of the six times he announced our name, he encouraged the 600-strong crowd to chant ‘Snodland!’   We have been in contact to arrange his next spectacles hopefully for him! - We have many celebrity clients including famous hypnotist and author Paul Mckenna, who wears Buchanan Optometrists Bespoke designed frames, designed and fitted by Alisdair. Read Paul's testimonial to hear about his experience.

Luxury Eyewear Retailer of the year, Premium Lens Practice of the year, Independent Practice of the Year, Vision for Life and Business Award. In 2013 Buchanan Optometrists were also shortlisted in the top 5 in the UK and came runner-up in an unprecedented five other categories.

In 2012 we were honoured to win the National Optician Award for Premium Lens Practice of the Year, proving our credentials as the best Optician in the UK for lens measuring and production.  The award recognises our approach to lens design and manufacture, where lenses are tailor-made to the individual to increase your field of view and clarity through lenses, thus providing the best possible vision. Please click here to read more about how lenses can be tailored to your needs here.

We were also thrilled to come runner-up for Vision for Life Practice in recognition of our specialist work with patients throughout their life, from toddlers to the elderly. To read more about Children's eye care, please click here.